The boys were playing off in a corner in the yard, making "collections."

Jumping on the trampoline Caleb with Uncle Micah, Socks, and Nessie in the background. Caleb was jumping on his Aunt Joy's trampoline, and Uncle MIcah's dog came up with him to jump! Here they're relaxing.

I grew up in Brazil, I speak Portuguese, and I look Brazilian. You wouldn't think it would be THAT difficult for me to adjust to life here in Brazil, right? Well, that's where you'd be wrong. In fact, that's where I'm wrong if and when I assume it should be a piece of cake for me to readjust to life in Brazil. Sure, it helps that I speak Portuguese, and that I can more easily get around as compared to someone who doesn't speak the language or look Brazilian. However, in the 15 years that I've lived in a country other than Brazil, I've become much more American than Brazilian. Here's why:
-I finished high school in the US (English)
-I lived with an American family for 6 months before college
-I went to an American college where there were no other Brazilians to speak the language with me
-I married an American (best decision in my life other than accepting Christ as my savior)
-I worked at American jobs (speaking English)
-I did my M.Div. in English
-All my adult life has been in English and in the American church and culture. My understanding has grown in and of the American context, but put me in a foreign context (even though I look, speak, and sometimes think in Portuguese), and I'm a fish out of water. Yes, that's right. I admit it: I'm a REAL missionary here in Brazil. I have to learn it all over again, or most things, for the first time.

Take, for instance, our attempt at opening a bank account this past week. Yes, it took a whole week. That's Latin America for ya. We went to the bank, but b/c we don't have paystubs with us (we just got here a week ago), we can't open an account. So, for whatever reason, the bank has a deal with the post office that you can open an account through them without proving income. So, we go to the post office. Come to find that the each post office only opens accounts for a bank at a certain address, so, we go to a different post office, hoping to get an account closer to where we'll live. We get there and find that that post office now opens account for a bank at a different address and none of the post offices now open accounts for the address we would like. So, we decide to go ahead and just open an account anyhow. Then, as we're going through the process/paperwork, the worker finds that we can't open a joint account b/c my wife doesn't have a certain ID #, so we have to start THAT paperwork, and go get that number the next day at a governmental office across town, and then after waiting a long time, we do that and return to another post office the next day to complete the bank account paperwork. We get it all filled out with the worker, and he tries to print it off to finalize it, and says that the printer's not working. So, we have to do it all by hand (at least HE did that part and we came back after lunch). All this with a very energetic 3 and 1/2 year old and a 17 month old, and with Becky feeling nauseated all day b/c she's pregnant. Furthermore, even though I speak Portuguese, I never did any of this business stuff when I was 16, so this is all new for me in Portuguese.

Sometimes I feel like it would be easier if I didn't speak any Portuguese at all, because it brings frustration when I can't understand or communicate easily, even though it seems as if I should (at least to the Brazilians around me). All in all, it's a blessing that I DO speak Portuguese, but it's good to recognize that I am, after all, an American missionary in a foreign context. In this way, I'll be able to learn more than I would if I assumed the position that I "knew it all". Happy learning then, Ben.

Talk back to the missionary:
Do you know of someone who's been in my shoes? What was it like for them? 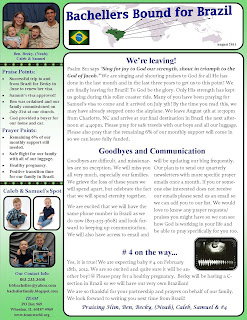