Can you guess what animal this is?

As we ask in our prayer letter...tell us your guess...reply below the picture in the COMMENT section. In a few days come back for the correct answer! We'll show you a full-body picture of this beautifully unique Brazilian animal. 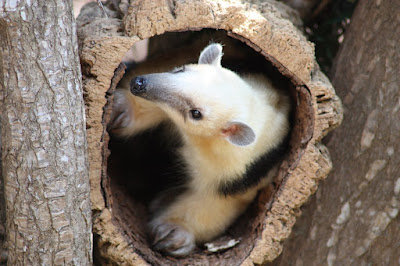 Here's the next part of our video series...this is Caleb riding his bike on October 12th, his birthday. We went  to a local park (Parque Taquaral, in Campinas, SP) for him to try out his bike. The city of Campinas closes some streets in the city on Sundays from 7am to 1pm, and on holidays too...this is to allow for bikes and runners (and families!) to have some space to walk and run and play in the city of asphalt... Notice all the people around us...it's crazy! But, wonderful that so many people get OUT of the house/apartment they live in... October 12th is a special holiday in Brazil... Children's Day..everyone has the day off to celebrate kids. It's fun that this is also Caleb's birthday, he will always have his birthday off from school here in Brazil! So, enjoy the video, and get to know us and our surroundings a bit WITH us. Thanks! By the way, Samuel wasn't too happy this day...he wanted his own bike to ride!

For Caleb's 4th, birthday, Becky made cupcakes in the shape of an icecream cone--that's what Caleb requested! 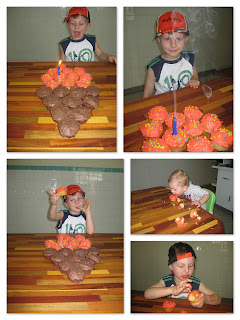 This is what Caleb got for his birthday...a bicycle! We actually bought it a few nights before we left the US, took it apart that same night, and packed it in one of the 27 bins we brought with us! Much cheaper to do that then to buy a bike here... He LOVES his bike! 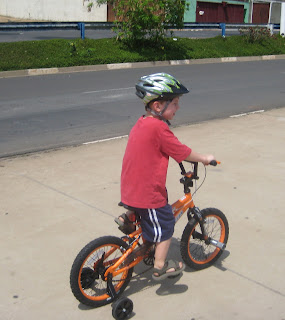 And here Caleb is demonstrating his climbing skills...AND falling skills. 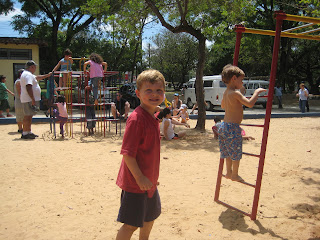 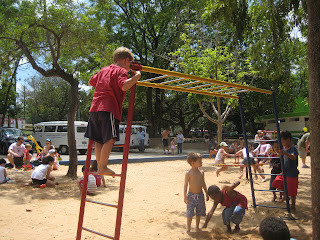 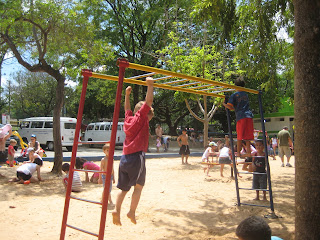 This peacock was one of many that are at this park...the boys loved hearing them! They are VERY loud, in case you've never heard one up close. 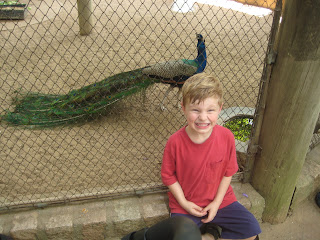 So, it was a wonderful October 12th for Caleb, and all of us, as we celebrated his 4th birthday!

Getting to know the Bachellers in Brazil

Part 1 of our new video series..."Getting to know the Bachellers". 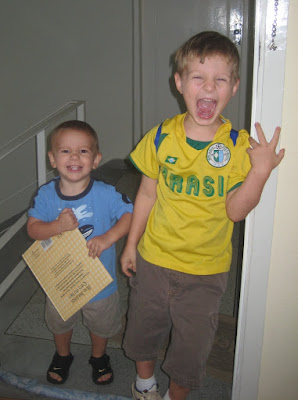 The boys just walked up the stairs to our apartment and are happy to be home. 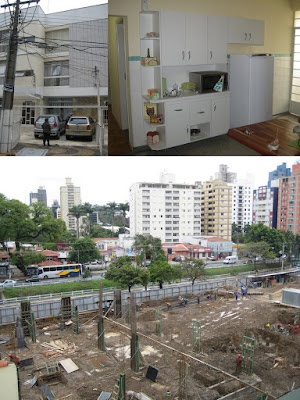 This is our apartment in Campinas, Brazil where we are living for Becky to go to language school. We are on the third floor and have an older, spacious apartment. The bottom picture is the view from our bedroom window. Yes, that's construction...just in case the boys don't wake us up early, the trucks will :-)
It has been an adjustment for us getting used to city living but we enjoy walking to the park, market, school, and just about anywhere we need to go. 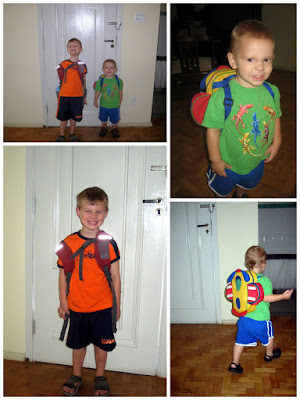 Caleb started school two weeks ago and has come to love it! He goes three mornings a weeks to a little pre-school that is all in Portuguese. The teachers have been great with him, using English words only when necessary. Caleb usually goes to school on Tuesday, when they have special extra classes in bodily expression (aerobics/dancing), Thursday (Music, instruments and library), and Friday (show and tell) .
Above photos: Caleb is ready for school! But of course, Samuel doesn't want to be left out! In Brazil, as in most other countries around the world except for the US, kids have to wear uniforms every day (I, Ben, did growing up here in Brazil). Below, Caleb is with two of his friends at the entrance to the school; the other photo is Caleb in his school room--very American, he's EARLY! :-) 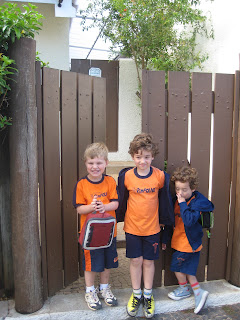 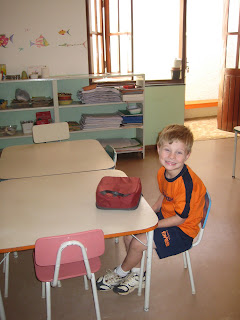 So we have now been in Campinas, São Paulo state, for two weeks. What a whirlwind it has been...then again, when is it NOT a whirlwind to move? Even still, it's a new culture (yes, for me, Ben, it IS), a new language (again, yes, it really is), and almost everything unfamiliar to us in a big city. Last time we lived in a city this big was when we got married in 2003 and lived in Fairfax, VA, right outside the beltway of the crazy area of Washington, D.C.

Anyhow, since we've been here, it has taken a week and a half to get our phone & internet set up. As soon as this happened (this was last Monday), our car started having problems. It's very interesting to me that God uses every little thing to draw us to Himself. We were praising God that we finally had contact with others via our phone and internet, yet could we praise Him even while the car busted each day this week?? Yes, every single day. Last Sunday, the car started making a horrible noise when I put the gear in Reverse (manual gears here). By Monday afternoon, I couldn't drive the car backwards because reverse wouldn't work without me forcefully holding the gear in place all while it's loudly grinding and popping out of gear. So I took it to a mechanic guy we were referred to, a believer, and he fixed it for a LOT cheaper than he should have. Tuesday, the front left tire started wobbling really bad, so bad that I thought maybe a steel cable or something busted within the tire...so that night I started to take off the tire and found that it wasn't on TIGHT! So, I tightened those lug nuts. The next morning, Wednesday, after dropping Becky off at language school and Caleb at his school, the tire started wobbling again. So... I took it to a tire place that afternoon and he "tightened it" himself and "guaranteed" that it wouldn't happen again. So far, so good. While there, I had him do an alignment on the wheels b/c the car was pulling hard to the right when going over 65mph (100km/h here in Brazil). Come to find out that the front right tire was leaning (in or out, I don't remember, I just said FIX IT please). Thursday we went to a large park as a family (Lagoa Taquaral, Campinas, SP--look it up!), and parked. When we left, the front bumper had gotten stuck on the cement curb that we pulled up over (oops). Guess what happened? Yep, it almost completely got ripped off, hanging only by the front top of the fender. That's why I always carry DUCT TAPE in my car! So...we got that fixed yesterday, Friday. Today, Saturday...well, nothing yet, and I'm not getting in the car until tomorrow...I could use a day off from car troubles.

Does God laugh when this stuff happens? I think it's more that He wants US to laugh when this happens. And, actually, this week, I HAVE been able to laugh at all this... In fact, I laugh to myself, thinking: "Welcome to missionary living"...and it's only the beginning. I should have taken pictures of all this stuff this week, but being as busy as we have been, there ARE no pictures. But, there ARE pictures of an outing we did today, Saturday, to the local Ecological Zoo Park, it's a zoo type park that you walk through to see all the animals in semi-captivity. Many native to Brazil, many from around the world. The climate in Brazil allows for many other tropical, sub-tropical and semi-arid animals to do well here year-round. Take a look at the pictures! Or look at them to the right of this webpage.

Ben, for the family.
No comments: