What was supposed to be a nice outing with the boys today turned out to be a visit to the urgent care center for Caleb...all because he decided it would be a good idea to jump from one end of the couch to the other...never mind that the "other" end of the couch was practically bare wood that had long ago lost its padding...The worst part? He dove head first...or shall we say, NOSE first? At least nothing broke in his nose or face...just a bad hit to the nose...and it was a relatively quick visit to the historically significant/architecturally attractive hospital! 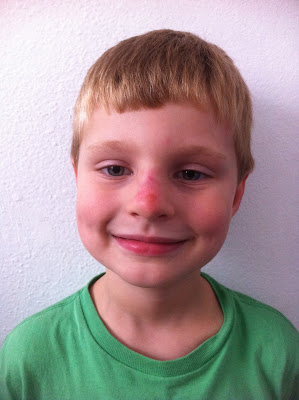 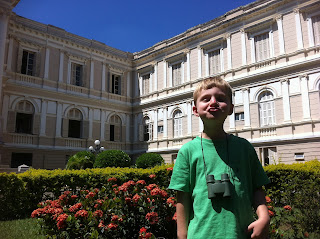 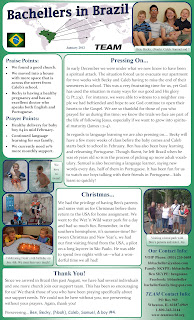 Today we had a man, José (Zé), do some yard work. I saw him working on the neighbor's yard and we needed work done on ours, but we don't have any tools here, they're all stored away in Anápolis, the city we'll be moving to this next summer (winter here in Brazil—we're in the southern hemisphere!). So, I asked him how much he'd charge to do our front yard, he gives me the price, and says he could do it today. So, anyhow, after he's done with the neighbor's yard, he comes over to ours and starts working. What would have taken me an hour or less took him about 2.5 hours. Now, he did a great job, in fact, a marvelous job! It was so funny to me (not frustrating, but funny, yes!), how as he worked during this time, I could hear him out the front window talking every now and then...to people who were passing by. Was I frustrated at this? Well, back in the US, possibly...I've got that old American hard-work mentality built-into me...after all, I sold Bibles/books door to door to pay for college, no easy task. However, I wasn't upset at him at all...and here's why I thought all this to be so funny: I understood what was happening. As Zé was working, many people would pass by, and they know who he is...he works as the grounds crew guy across the street at an apartment building property. Everyone knows him, and he knows everyone too! So, people would say hi, or he'd say hi to them, put his elbow over his hoe, and catch up on the latest with them...for 30 seconds or so. Then he'd get back to work. A few minutes later, someone else would stop by, and the same thing would happen again. It was so funny for me to observe a cultural practice (a very GOOD one a that) in “real-time”. It's a cultural lesson I'll hopefully learn the easier way. I've 'known' the lesson for my whole life...studied about it in college and seminary, but merely 'knowing' isn't enough, I've got to 'practice it'. So today I have seen it afresh: “In Brazil, people are more important than time.” This is a value that Brazilians have which puts us Westerners to shame. It's a biblical principle that we would all do well to learn. Thanks Zé for sharing the Brazilian culture with us today.
No comments: