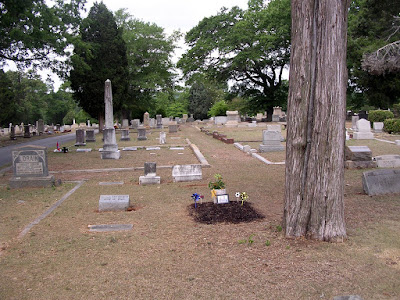 This is the larger view of where Noah is buried. He's right under an old Cedar Tree, along with folks much older than he...they were all buried between the mid-1800's to mid-1900's.

Thanks for keeping us all updated - the pictures of the grave are really beautiful. ...I especially like the soccer ball. : )
I'm thinking of you guys every day. Much love, Andrea

Ben and Becky,
What an awesome tribute about Noah. Ya'll did an excellent job! I am sorry this is late, but here is the link to the comments that Dan Vance said about Noah's party: http://www.xanga.com/manhouser.
These are the comments he had:
1 Thessalonians 5:16-18 "Rejoice always, pray without ceasing, in everything give thanks; for this is the will of God in Christ Jesus for you."

Ben Bachellor, ironically, is married. That was my first impression of him. Ben plays ultimate frisbee with me. He's not the most regular attender, but he's around enough that I would defintely consider him part of the crowd. At six-two or six-three and one of the better athletes at school, I certainly have never enjoyed the times when I've had to guard him or when he guards me. We watched the world cup last summer and we won an intramural frisbee championship the spring before that. We're not particualrly close, but we get on all right. He roots for Brasil, as he spent the better part of his life growing up there. Ben is one of the kinder people I've ever met. When an allegation came that he was taunting another player, I flatly refused to hear it--even before hearing the particulars of the incident--and in retrospect, although hasty, my action was not incorrect; it was simply a misunderstanding. Ben apologized profusely even though he hadn't done anything wrong. Having played sports at CIU for six years I have only ever seen three people use the opportunity to witness. Ben is one of them. Many times I have seen him befriend a visitor, sit out a point or two and get to know them, ask the typical litany of get-to-know you questions, and, when appropriate, tell them about the gospel. He even asked my permission to witness to a group of Hispanics who play indoor soccer at our school on our open gym nights, and while these actions might seem trivial or mundane I have to point out that with Ben it really is just a legitimate outgrowth of his love for people and the Lord--also, easy as his tactics may be, I don't see anyone else doing them at our highly evangelical school. So there you have it, a pretty crude literary sketch of my (friend? acquaintance?) Ben Bachellor. Just an all-around solid, nice guy giving everybody a lesson in how to practically live out their faith. And I guess it must be the fact that I respect him (because I've already mentioned that we aren't that close) that made it so devestating to hear that his 15 month old son Noah died last Friday night.

I know that you're supposed to say nice things about the deceased--especially the recently deceased, but I mean this when I say it: Noah Bachellor was the happiest baby I have ever known, and maybe the happiest I have ever heard of. At his funeral, a slide show ran before the service. I'd estimate that there were about 150 pictures of Noah--and in all but about three of them he was smiling. Not just smiling--open-mouthed laughing. The slide show by itself got the tears flowing, I mentioned to my roommate, Rudy, who was sitting next to me, that I wasn't sure I'd make it through the service.

At church we've been going through Rick Warren's devotinal series the 40 Days of Community. I've enjoyed the lessons so far, much to my surprise; my dad once commented about the 40 Days of Purpose (and I agreed), "It's not bad stuff, I just don't see what's so great about it that people find it so inspiring. It's just average Christian doctrine presented in an average way."

So each week they ask us in sunday school if anything from the reading has hit home for us. I mentioned that while it wasn't from the reading per se, attending Noah's funeral definitely showed me the ministerial value of community:
"In the middle of the afternoon I saw several hundred people take time out of their days to go and support the Bachellors at their funeral. I recognized faces from school, from the community in which they lived, from the ultimate frisbee crowd, from work, and from their church. All of these people came to share in the Bachellor's sorrow and to console them in whatever way they could, to help bear the burden. In the opening prayer the pastor remarked that the pain didn't diminish any, but that the Bachellors could seek counsel in the Father, as He, too, knows what it's like to lose a son. It got me thinking that maybe there were parts of intimacy with the Father that I don't want to learn about this side of heaven. The situation grew even bleaker when on the back of the bulletin, under siblings, it mentioned that Becky was pregnant (which I knew) and that there was an unborn baby in heaven they had lost before (which I didn't know). We sang that song "Blessed be the name of the Lord" and you know there's a lot of Job imagery in there that you don't always think about--'you give and take away', or 'though there's pain in the offering'--and I could barely get the words out I was crying so hard, and as I looked around I don't think there was a dry eye in the place. I don't think I'll forget what happened the rest of my life--when we got to the bridge part where it says "you give and take away" Ben had one arm around his wife comforting her, and the other hand was raised high--the only one in the room--glorifying the Lord. And I can't really think of a more perfect example of the church functioning as a community, as a body. Everyone there was grieving with the Bachellors and because they knew of the Lord's love them and the love that the congregation had for them, they were able to pull out of their sorrow for a few moments. In fact--I don't just mean this a cliche--I couldn't believe how much I felt ministered to by watching Ben be strong for his family and his resolve to praise the Lord no matter what. And I was thinking of that verse in Ecclesiastes, 'Better to go to the house of mourning than to the house of feasting; for that is the end of all men and the living should take it to heart. Sorrow is better than laughter, for by a sad countenance the heart is made better,' and the verses that say 'weep with those who weep, and mourn with those who mourn.' The church was functioning exactly as it's supposed to that afternoon."

And when I got done recollecting, I don't think there was a dry eye in the place.

Robertson McQuilken is fond of contrasting the terms normal and average--the supposition being that humans, because of their fallen state, are abnormal, i.e., not how God intended them to be. So you can refer to an average Christian, but in order to view a normal Christian you have to consider Jesus Christ. I know that Rick Warren's writing is pretty average, as are Ben's evangelistic activities. And there's certainly nothing unduly impressive about friends and loved ones supporting each other at a funeral--it's what you would expect. Average Christian doctrine presented in an average way, but all this average activity brought me closer to the heart of God than I'd felt in a while. It was as if we were normal.

Have a nice day!

Hope you enjoy this!
Jason Rudy