Tuesday we went to San Rafalito Island, a protected island that is part of the Balandra protected area of La Paz. We did what Steve calls Gorilla Diving. More precisely, Steve and Dr. Sluka gorilla dived, I "gorilla snorkeled". This is when you kayak out to the area you want to dive at, drop anchor (carefully, so as not to damage the coral reef, by finding a spot among rocks), and put your scuba gear on all from a kayak. It's much cheaper than paying a charter boat to take you out, in fact, it's free! And the joy of kayaking a little over 3.5 miles round trip from the beach to a 50x50 ft island with a small lighthouse on it in open water that is 60-80 ft. deep is half the fun! Oh, the beauty of enjoying God's creation! Wow! I wish everyone had the privilege of this. The fact it, there is so much of creation that we can enjoy if we will just take the time and praise God for His creation and the glory it brings Him!

It was a beautiful time of seeing sea lions up close and personal--more than most people are comfortable with--but they are curious animals. The important part it to let THEM approach you, not you them. We have to remember that they are much more graceful than we are in the water, quicker, and often weigh two times or more than us...so it's always a good idea to be careful around them. What you DON'T see in this video is what I was holding my hands up at the beginning of this video: to the right of the view are hundreds of tropical fish along the reef which I spent close to two hours diving down (just with my own breath) to look and marvel at. I'm not sure which I was more impressed by: the sea lions or the hundreds of fish!

Later in the evening, we went out to Rancho El Camino, a ministry TEAM has outside the city of La Paz. This last year, they have had over 1200 people pass through the ranch--from kids in the surrounding area, or from La Paz, or adults and different groups coming for a retreat, the impact they have in the community is very significant.

Two things I want to write about here: the surprising benefit of a hurricane, and a faithful follower of Jesus.

First, the hurricane. Out at the ranch, water has always been an issue. You see, it's really a desert out there! In fact, the only reason they have had water since the day TEAM purchased the land for this ranch was because there was an earthquake that brought water to the surface and provided a means to have a well! Otherwise, it would be very challenging to live and do ministry out there! However, the well was getting quite low and since it rains very little in the desert, the well wasn't replenishing itself. Then came hurricane Lidia with heavy rains and did something amazing for the ranch, and in fact, the whole Baja peninsula which turned vibrant green and still is green today, when normally it would not be. As you can see from the pictures below, there is water in the "arroyo" behind the ranch. An Arroyo is simply the riverbed or creek where water "sometimes" flows. I say sometimes, because it's a desert, after-all.  When I visited the Ranch in October 2015, this was all sand, not even rocks. Plain old sand. Any water that existed was in the dam of the land owner up the creek from them. He had dammed the riverbed and trapped any water that might come to the ranch. All the ranch had was sand all the way to their dam lower down the river bed. What the hurricane did (a merciful act of God?) was to wash all the sand down from the mountains and fill the upstream neighbor's dam with sand, and push all the sand out of the ranch's riverbed downstream, and filled their riverbed with water! They used to play beach volleyball in the riverbed, but as you can see from the photos I took below...they'll have to find another place for that! 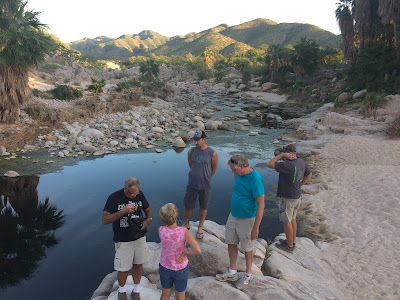 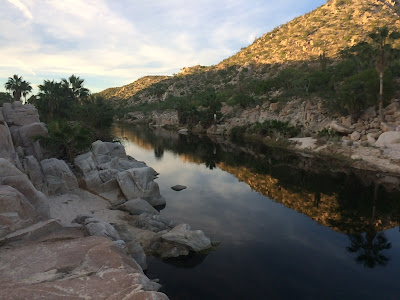 What a blessing then that the hurricane did bring some good to the ranch even though it was a hurricane!

Now, onto the Baja 1000. No, not the race coming up this month here in Baja, but the story of a faithful follower of Jesus, a man named May (pronounced "My"), who walked/hitch-hiked the Baja peninsula. I met him last night at the Ranch. I had heard about this call he says he received from Jesus to basically travel throughout the Baja peninsula telling other about Jesus. He is on staff at the Ranch and is a very kind, genuine person.
He told me stories of him traveling, hitch-hiking, and asking God to provide for him during the journey. It was amazing to recognize a young man who had matured so much and grown so close to Christ in faith through obedience. Through what he went through, he has learned more than the average pastor does in a lifetime pastoring a church: what it means to really have community, to depend on God for your daily bread, to truly show the love of God to others. He said his trip was sad and joyful in many ways. Joyful that he grew so close to the Lord through it, yet so sad because he saw the Christian churches act like a club, a private gathering of people that are like-minded but will not do what Christ commanded them, even when May showed them how and opened up many possibilities for outreach that were so simple. It was hard to listen to his stories and the sadness it brought him, but it was a joy to hear of God's faithfulness to May because of his faith. Oh, that more of us would be like this young man! I respect and look up to him (though I am indeed taller)! 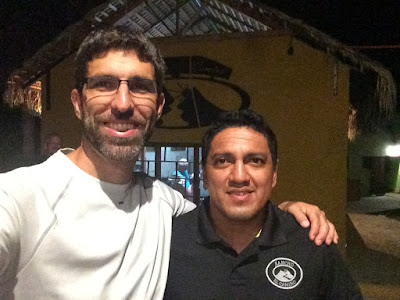